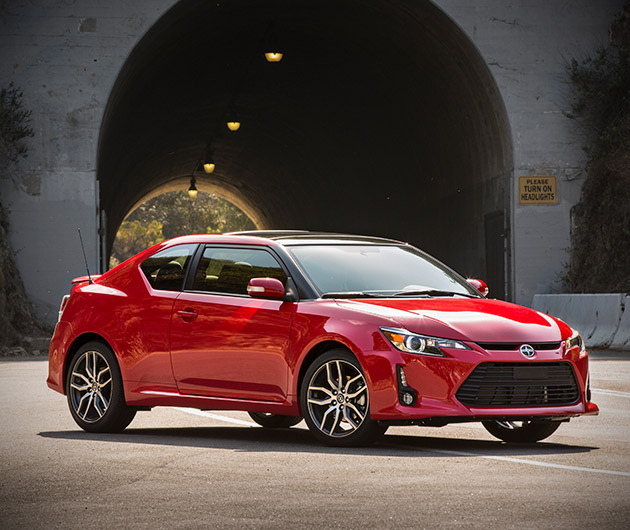 Capitalizing on the dazzling – and rightful – success of their previous affordable high-performance sports cars, the 2014 Scion tC sees the famed Toyota-Subaru partnership expertly revamp this thrilling range both inside and out. Again. 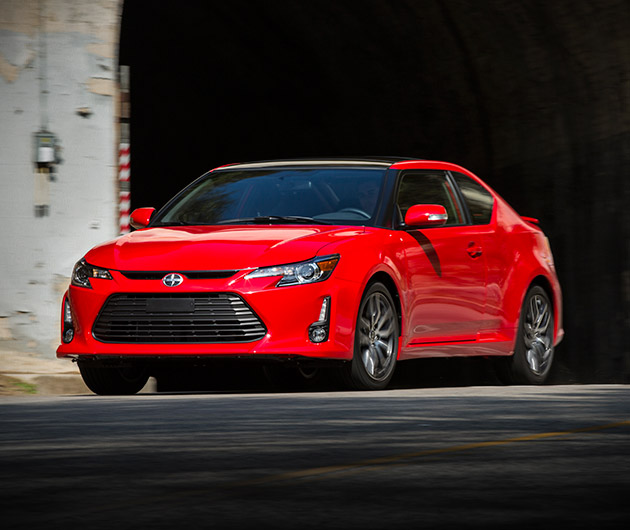 The sport coupe’s snarling front end remains, styled even more menacingly with an oversized open grille with embedded tC logo surrounded by accent LED lighting with distinctive projector beam headlamps glaring from the sides. More LEDs can be found round back on the taillights and its athletic look is exaggerated by the all-new lowered sloping hood which hides a 2.5-liter 4-cylinder engine and the equivalent of 179 rampaging stallions. There’s a choice of a 6-speed manual or automatic transmission which boasts gear changes at twice the speed of the previous model along with Dynamic Rev Management, a technology borrowed from the FR-S. Two extra paint jobs – Absolutely Red and Blue Streak Metallic – have been added, bringing the choice to seven. The manual is priced at $19,210 and for the automatic you’ll need to shell out a grand more. 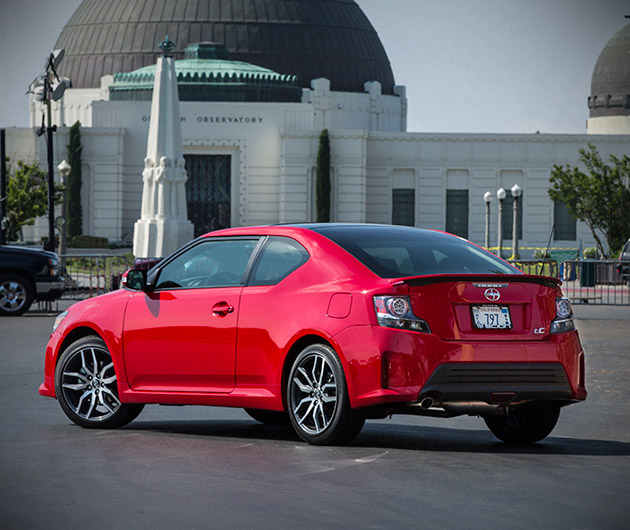 The tC rides on 18-inch machine-spoke alloys finished in a glorious premium dark gray gloss, snuggled within aggressive 225/45R18 tires. Handling has been improved thanks to all new shocks, increased body rigidity, adjustments to the stabilizer bar hardware and re-tuned power steering for the ultimate in responsiveness. 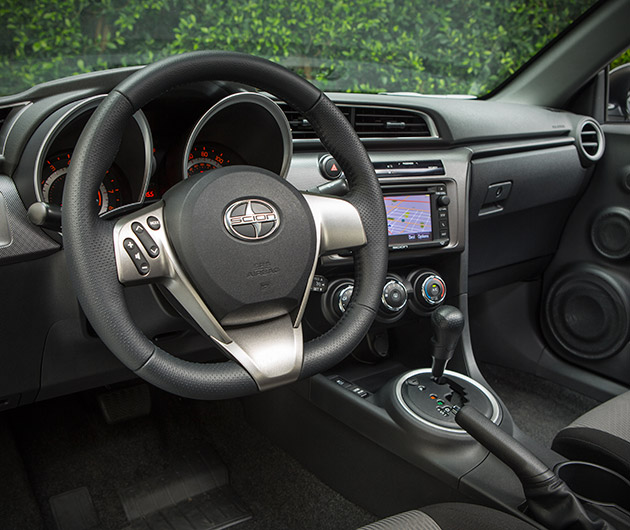 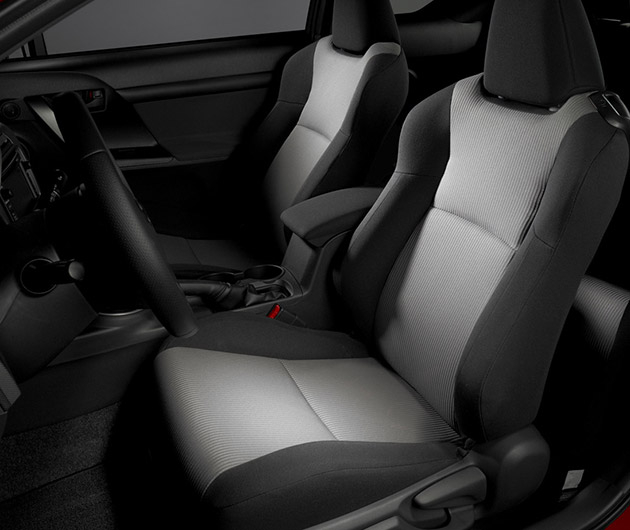 Inside the ride sees the most significant improvements with upgraded features and new gadgets, all decked out in luxurious high-end materials. The tC is the first Scion to be equipped with the Display Audio system with a 6.1-inch LCD touchscreen as standard. The system’s features include Bluetooth connectivity, HD radio technology and steering wheel-mounted controls and, as of 2014, it will be the first non-luxury brand to feature such a system across its entire fleet. 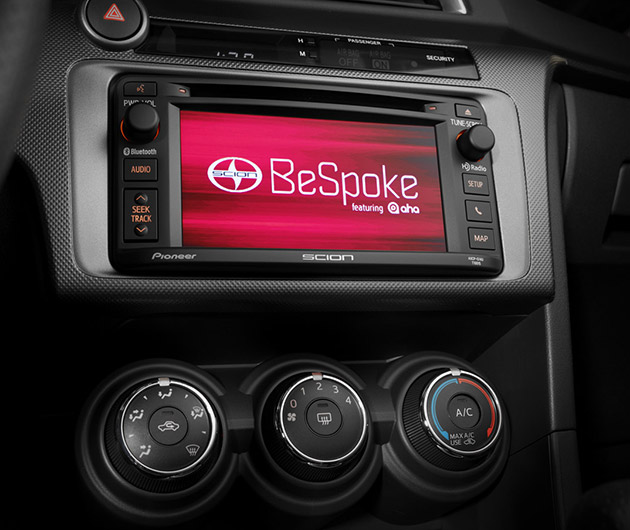 Also available is the all-new Scion BeSpoke Premium Audio system which incorporates Aha and boasts full navigation and smartphone connectability. Via it, you can access a whopping 30,000 free audio stations, including 17 of Scion’s own channels. The system is social media-friendly and offers instant access to the likes of Yelp and TripAdvisor and a slew of news, sports and entertainment channels. Expect to part with an extra $1,198 for this clip-on.

There a loads of further nice touches to the tC such as the side skirt with the Scion logo, silver seat belts and a solar-powered illuminated shift knob. There are front, rear and cargo Scion carpet mats and the front and back locator badges light up when the car is unlocked.  The headlamps are auto on-off and the driver’s window auto up-down, premium stitching is found throughout the sporty cockpit-like cabin, with the bucket seats decked out with contrasting fabrics and above the radio rests a funky electroluminescent panel. 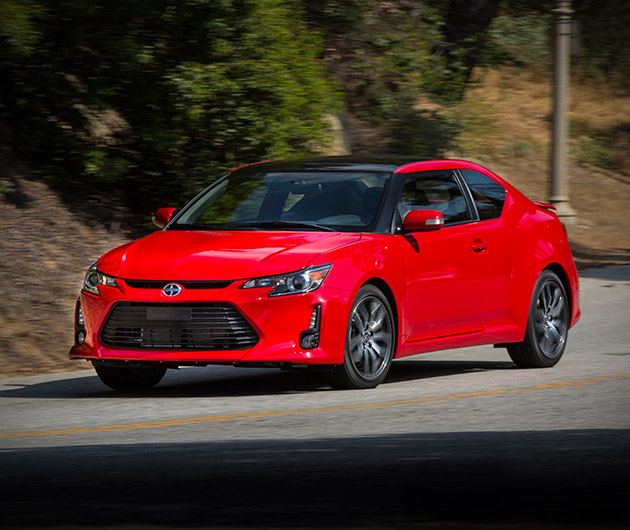 The tC currently accounts for around 40 percent of Scion’s sales and when this one debuted at the New York International Motorshow it certainly turned a few heads. It will no doubt turn plenty more when it hits showrooms this June and that 40 percent could well rise significantly.